May 17, 2022 a large fire started close to Coronado’s Camp with very high winds and rough terrain. The initial call for the fire was for ECCA Volunteer Fire Department. Very quickly ECCA knew more resources were needed and View and Buffalo Gap Volunteer Fire Departments, as well as the Texas Forest Service were called to assist. Upon arrival access was made through Buffalo Mountain Ranch to find a very fast moving fire with very high flame lengths. The fire became too dangerous and crews kept having to pull out of the way of the fire and try a different angle of attack. Not long after all this was happening, a call came out saying the fire was reaching View in the Hidden Valley Road vicinity. The fire continued to move north and take over several houses despite crew’s efforts to stop the fire from the houses. The very fast moving fire pushed fire crews out and relocated to Hillside Road just north of Hidden Valley. Command was set up at the end of Hillside Road and more agencies were called. Spot fires jumping at least 1000 yards ahead of the fire became trouble for crews battling the fire and continued to threaten more homes now on Hillside Road. As night fall became closer, temperatures lowered and humidity raised to help crews throughout the night. When night fall hit, forward progression had stopped. Crews continued working throughout the night and into the next day. Roughly around 2 pm humidity had dropped tremendously from the night before and winds really picked up. Places crews could not get to along the west flank of the fire due to rough terrain flared back up. The fire now was moving north west at a high rate of speed. A second fire along the west flank closer to Coronado’s Camp also flared up headed for the flare up further north. A third fire flared up along the east flank of the fire. Winds, temperatures, and humidity along with the fire started a very bad storm creating a very large tornado composed of dirt and wind barreled straight for the fire. This storm changed wind direction and pushed the fire straight east towards View. Despite efforts, crews were unable to stop the fast moving fire. Residents on Braune Road and county road 297 were asked to evacuate at this time. Chief Bishop learned the fire had now jumped 277 closer to Coronado’s Camp and the other east flank fire was headed to jump 277 as well. Residents on Cr 321 and along HWY 277 were asked to evacuate and HWY 277 was shut down. The fire continued to grow and gain speed as it crossed HWY 277 and residents in Buffalo Gap were asked to evacuate. Crews were able to stop the new head fire along Braune Road and FM 1235 along the hills of Camp Berkeley. The new flank fire to the north of the head fire was stopped along Cr 297.

Many homes, vehicles, sheds, livestock, pets, and wildlife were lost during this fire. Keep all the families that lost their homes and livestock and properties in your prayers. We want to thank everyone especially the community of View for the support of the fire department and the way our community has come together to help one another in these trying times. We want to thank all the resources that came to help View, Buffalo Gap, and ECCA to extinguish this large fire from local to state to federal agencies that gave a hand in the efforts. A lot of local departments, state, and federal agencies came to help and we couldn't list them all but we thank you! We also thank the Red Cross for the help you have provided. Other organizations, place of business and restaurants have given such a big hand and there's so many to name and we thank you! 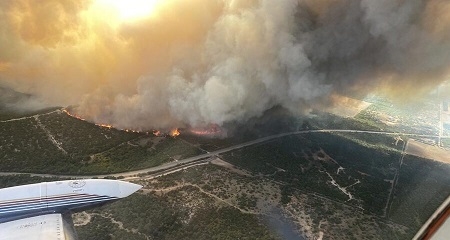 Today, 12 days later, all agencies have pulled out and declared this fire 100% contained. Thank you to everyone that had a hand in bringing this fire to an end!

We are very grateful to our community and the founding members of the View Volunteer Fire Department. They saw the need for a fire department in our area and made it happen. These members donated time, land, and their skills to build our current station.
➜
Annual Chili fundraiser
We would like to thank everyone who attended our annual chili fundraiser Sunday December 4th. We are very grateful for your generosity and enjoyed visiting with you. Your donations will help us equip our fire fighters with new personnel protective equipment.
➜
RABIES CLINIC
Mark your calendars. Saturday April 2nd we will be hosting our annual RABIES Clinic. Doors will be open from 1-3 pm. Other shots and city tags will be available upon request. We are located at 108 Grand Avenue in View.
➜
Abilene Fire Control Conference
The Abilene Fire Department held its 61st Abilene Area Fire Control Conference Saturday August 15, 2015 in conjunction with Texas Engineering Extension Service. They provided training and continuing education hours to hundreds of area volunteer firefighters.
➜
RABIES CLINIC
RABIES CLINICSaturday April 11 from 1:00 PM to 3:00 PM @ The View Vol. Fire Department108 Grand Avenue in View Cost is $10.00 Per AnimalAdditional Vaccines and Tags Are Available Proceeds will help us purchase needed equipment and meet expenses For more information call 325-690-9465
➜
Benefit Fish Fry and Bake Sale Saturday Feb 21st 11:AM to 7:00 PM
The View Mall will be having a Benefit Fish Fry and Bake Sale Saturday February 21st from 11:00 AM to 7:00 PM. All proceeds will benefit Shawn Johnson to help with medical and personal expenses for surgery.
➜
FIRE & ICE FEAST
The 6th annual Fire and Ice Feast is being held in Buffalo Gap Super bowl Weekend January 31st - February 1st. The event benefits the South Taylor County Volunteer Fire Departments of Lawn, Tuscola, Buffalo Gap, and Moro.
➜
New Year

We are pleased to offer PayPal Donation services for your safe and secure online donations. 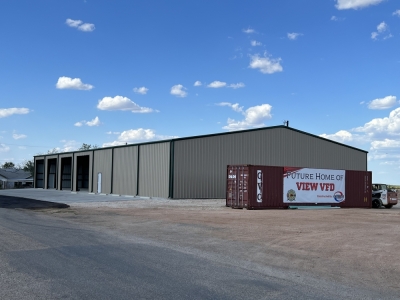 This site has been viewed 54,521 times.
News
Events
Pictures
Apparatus
Maintained by the members and staff of View Volunteer Fire Department. Designated trademarks and brands are the property of their respective owners. Copyright © 2006-2022. YourFirstDue Inc. All Rights Reserved. Content on this web site is supplied by View Volunteer Fire Department. YourFirstDue Inc. cannot be held responsible or liable for any content, text, pictures, or any other media found on this web site.
Management login
Powered by